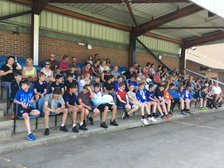 Tough First Game Back For Harriers!

It was a difficult first game for the White team, as they faced a Rooksdown side who were very comfortable in possession. Freddie Dobson stepped up (on his birthday!) to go in goal, but unfortunately got injured after a brave tackle on a Rangers striker. Goalkeeper duties then went to Jonny Hicks, who made a handful of fantastic saves throughout the game and deservedly earned the Player of the Match award. Thomas Sinton scored with a calm 1v1 finish to grab a goal before half time. In the second half, both teams struggled to recover when losing possession, which led to a basketball-like match. Rooksdown were clinical with the chances they created, and Liam Taylor got back to last season's form by scoring 2 goals for Harriers.

Well done to Rooksdown, and good luck for the rest of the season!

Overall, despite a few having tired legs, the boys gave great effort and will take some positives into next week's match against Burghclere.

Player of the match