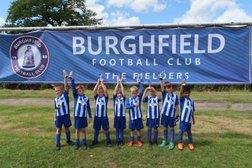 U7s going from strength to strength

Today saw the U7s best performance since they formed at the start of the calendar year. The under 7s began training to form feeder groups into future years of Thatcham Town Harriers toward the mid-season last year. Since then, they were thrusted into the Reading and West Berks League for the 2nd half of the season and now enjoying playing in Summer tournaments.
Playing in the Burghfield small sided tournament, the Ice team managed to draw several games, while the Fire team came away with 1 loss, 2 draws and 2 wins which sees their best results since coming together. The final thrilling game was between the two teams where Ice led for much of the game, only to finish with a draw right at the end.
The future is looking bright for these two teams, led by Neal and Graham Murray. Well done!
Share via
FacebookTwitter
https://www.thatchamtownharrie
Recent news